“Ideas themselves are worth very little”

One of the key themes of EEF 2018 is the digital economy. Alexander Galitsky, founder of venture fund Almaz Capital and one of the bestknown entrepreneurs in the Russian IT industry, discusses whether it has become more difficult for Russian companies to break into the international market, the culture of buying innovation in Russia, and why blockchain is the future.

— What difficulties do Russian startups experience in accessing the global market? 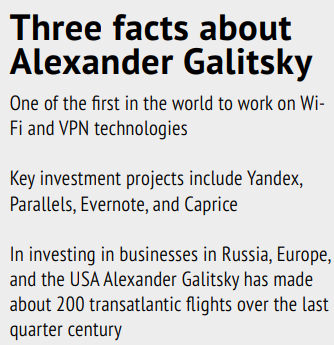 — All companies have the same difficulties, no matter which country they come from. You have to position yourself correctly and, most importantly, not make any mistakes when it comes to key people. That’s why networking in person at various forums and conferences is so important. You cannot trust the job of creating your team to artificial intelligence. Of course a robot can find potential candidates for jobs like cashiers or retail salespeople. But when specialists are required for leading posts you need to carry out a ‘manual search’ among a trusted pool. Even then you have to take into account the specific nature of each market. When we were looking for people for the American office of one of our companies Lev Sheremetyev, a descendant of Count Sheremetyev, warned me: «Be careful when hiring Americans, because every American is, above all, great at selling himself.» And that’s very true. In Europe there is a different problem: you have to distinguish the person who is really burning with a desire to do something from the person who leaves at the end of the eight-hour working day regardless of whether there are still fires to put out.

I’m now very interested in China, since in the not too distant future it will be second in the B2B market after the USA, but I honestly fear the country because I do not understand it at all. I recently travelled around seven Chinese provinces and saw how diverse and multicultural it is. There are about 60 different nationalities in China!

— Isn’t it true that the political situation presents additional problems?

— Of course it has become more difficult for Russian companies. The distrust of the Russian state has undoubtedly affected business relations. But you have to learn to overcome that, grit your teeth, and move forward — there is no other way. It is important that the world, especially technology, has become international: entire global technology and production value chains have been formed. The most valuable assets are not natural resources but people. There are clever people in Russia and we need to use this resource correctly, both in the interests of the country and to contribute to world progress.

One of the problems is that Russia has no great success stories, where somebody has launched a company and has become wealthy in a short time. Yandex and Mail.Ru are solitary examples. But there is no history of mass purchases of companies by Yandex. For example, in 2016 Google alone bought over 200 companies to guarantee its growth and its position as a technological leader. The culture of buying innovation has only just started to manifest itself in Russia; it is still far from being fully developed. And this leads to another problem: entrepreneurs are afraid of losing ownership of their company and see any startup they engage in as the last and only one in their lives. When my international partners look at Russian companies they say that all Russian entrepreneurs are greedy.

In addition, there are virtually no product management specialists in Russia. You take on one programmer, then a second — that’s all fine, but assembling a whole team is not so easy. It is as though the ‘communist cell’ mentality kicks in: work becomes a collective struggle for leadership, for sorting out the strong from the weak.

However, there are some pluses. For example, once a team has been formed it is very loyal and can survive difficult times, something that you will hardly ever find in Western companies.

— The world is seeing a boom in cryptocurrencies. Might the ICO replace the venture industry?

— I don’t think so. An ICO is essentially crowdfunding. Remember how popular Kickstarter was at one time for creating new gadgets? People threw lots of money at it, but then problems arose: some did not receive the goods they paid for; others did not receive what they were expecting. And the Kickstarter idea wasn’t so popular any more. In the technology business, ideas themselves are worth very little — it is only the putting of that idea into practice that is of value. An ideal ICO story would be if a well-known and successful businessman like Bill Gates or Elon Musk were to launch a startup and conduct an ICO. Naturally many people would offer money in exchange for tokens. But the problem is that for an investor, even a professional one, it is quite difficult to assess the initial and eventual value of new tokens. And it is difficult for an entrepreneur to assess how much capital he will truly need during the five to seven years it takes to establish a company.

However, I do believe in ICO, as special systems will emerge to help investors make more measured decisions when purchasing tokens. At the moment, unfortunately, it is all built on the emotional element.

— To broaden the discussion, what is your attitude to blockchain technology?

— I am a great believer in blockchain technology and I see sufficient applications for it in cases where a distributed end-to-end environment of trust is required. It is probably comparable with the introduction of the IP protocol and the Internet into our lives. For example, if public money is ‘coloured’ with the number of a ‘coin’ and its movement accommodated in a blockchain environment, that will obviously help in the fight against corruption. Whichever way you look at it, blockchain is the future. — One of the themes of EEF 2018 is the trust economy. Uber and many other companies throughout the world are built on the principle of trust. Some think that the future lies in shared consumption, while others are of the opinion that this bubble will soon burst. To which of these points of view are you inclined?

— The question is not whether Uber will die, but whether car sharing will survive. And it will. It is no longer expedient to own a car in Moscow. Even if I always travelled using Uber Black [the most expensive option — Ed.], it would still cost less than owning a Mercedes of the same class. So why do I need my own car?

It will be the same with housing. Now, you buy somewhere to live that is very expensive, but its value does not increase over time, it only falls. Previously, the spaces in which people lived saw very little improvement for decades or even centuries. Now everything is different. Children will not live in the houses their parents are building as those houses will simply grow old in technological terms in a fairly short space of time. As a result you are investing in heaven knows what. In developed countries, people do not buy property, they live in rented accommodation — near their work, for example, or their child’s school. So the bubble will not burst, because there is no bubble. It is an economic trend based on a new technological wave.

Entrepreneurship and Employment in the Age of Giganomics
St. Petersburg International Economic Forum 2021
IT industryEntrepreneurshipLabor MarketDigitalization
483

Open Source in Russia: To Be or Not to Be?
St. Petersburg International Economic Forum 2021
IT industryDigitalization
1352

Research
High-tech business in Russian regions, 2020, the National Report
The third edition of the National Report highlights regions with favorable conditions where resources are concentrated for high technologies development, as well as regions that have already succeeded in non-resource sector developing. The global goal of the Report is to identify potential points of non-resource growth of the Russian economy.
IT industry Innovation infrastructure Regions of Russia StayHomeEconomy Startups Digitalization
4157

Research
Ratings of Digital Rights Observance
In this publication, the non-governmental organization Roskomsvoboda assesses the degree to which popular web services of Runet (the Russian-language segment of the Internet) observe digital rights of their users.
IT industry Cybersecurity Digitalization
1790